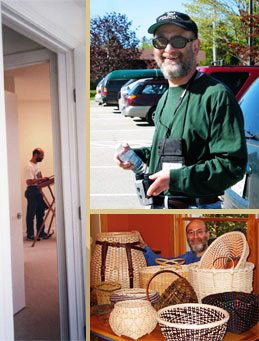 I was born about ten thousand years ago,
And there’s nothing in this world I don’t know

According to Phil Passen, that is all you need to know about him.Actually, Phil was born in 1947, and one thing he does know is how to play the hammered dulcimer, which he never heard of growing up in Monroe, Michigan; Toledo, Ohio; and Ashtabula, Ohio.He probably never heard of the dulcimer while participating actively in the antiwar, civil rights, and women’s liberation movements in Cleveland, Los Angeles, Boston, and Chicago in the sixties and seventies. But the folk music all around him in those days entered his spirit and never left.

After Phil and his wife, writer Barbara Gregorich, settled in the Chicago area in the early seventies, they joined the Old Town School of Folk Music, and Phil began to itch to play an instrument. He really wanted to play the drums, but the set he had in mind didn’t fit into a nine hundred square foot apartment.

Although Phil heard the hammered dulcimer for the first time on John McCutcheon recordings in the late seventies, he didn’t immediately make the connection between hammering strings and hammering drum heads.

Finally, at a John McCutcheon concert at the Old Town School in 1994, the light dawned. Inspired anew as John played the dulcimer, Phil thought: “I can do that.” After just one lesson with teacher Dona Benkert, Phil was hooked. Promises, Promises, published in the summer 1995 issue of Dulcimer Players News, tells the story of Phil’s early (and continuing) dedication to the dulcimer.

In 1996 Phil left his work in the graphic arts industry to devote his time to the dulcimer.

Few musicians play the hammered dulcimer. Fewer still sing while accompanying themselves on this fascinating instrument, whose name means “beautiful song.” Phil Passen does both.

Phil plays and sings traditional American and Celtic music. Can such upbeat dance music be called soothing? With rhythmic playing on fast tunes and sensitive playing on slow numbers, Phil’s music often elicits that word — “soothing.” And though it may seem contradictory, listeners also dub the music “happy” and “bouncy” as they tap their feet to the beat.

CDs
Phil’s latest CD contains seven tracks of toe-tapping old-time and bluegrass tunes and songs. With guitar, banjo, and bass accompaniment from wonderful musicians, Some Come to Tarry is a great listen for dulcimer and traditional music fans.

Phil’s third CD, Tramp, Tramp, Tramp: Music of the Civil War on Hammered Dulcimer is a fascinating solo recording of music commemorating the 150th anniversary of the American Civil War. The hammered dulcimer was popular in the United States during the Civil War, and music of that era seems right at home played on this unique instrument. Many tunes and songs in this program are still familiar today, such as The Girl I Left Behind Me; When Johnny Comes Marching Home; Home, Sweet, Home; The Battle Hymn of the Republic, and Tramp, Tramp, Tramp, the Boys are Marching. Others, such as Lorena; Lincoln and Liberty; The Battle Cry of Freedom, The Marching Song of the First Arkansas Regiment; Shiloh Hill; and John Brown’s Dream are less familiar but just as beautiful, rousing, and inspiring.

Phil’s second CD, with guitarist Tom Conway, is Cold Frosty Morning: Christmas and Winter Holiday Music. Beautiful melodies such as Jesu, Joy of Man’s Desiring andWhat Child Is This; old favorites such as My Dreidl, Jingle Bell Rock and Here Comes Santa Claus; and contemporary songs such as Winter Solstice and Hot Buttered Rumare featured on this diverse and exciting recording.

Libraries, schools, receptions of all kinds, store openings, barn dances, parties, teas, weddings, coffee shops, bars, and restaurants — Phil plays all these in settings formal or informal, as background or foreground music, solo or with guitar or banjo accompaniment. He has consistently been selected as a “best of the best” by the Library Administrators Conference of Northern Illinois. Phil performs most frequently in the greater Chicago area, which, due to his poor sense of geography, also includes Indiana and Wisconsin.

Not content to weave only melodies, Phil has taken up basket weaving and chair caning. He is a member of the National Basketry Organization, as well as the American Federation of Musicians Chicago Local 10-208, the North American Folk Music and Dance Alliance, the Recording Academy, the Old Town School Of Folk Music, and is, he claims, the only 10,000-year-old member of AARP.